The Letter Writer’ is a low-budget, independent film , in many ways a small film, dealing with the rite of passage of heroine, Maggy (Underwood) from being a thoroughly young ‘Modern Miss’ in an immoral world to finding her true course and life’s purpose. If such an idea sounds prissy, then in some parts of the film the overt morality of the story and message is indeed rather overwhelming.  For the most part, however, despite stiff and ‘clunky’ acting from many of the principals, the film offers a heart-warming and emotionally-uplifting story where good triumphs in an entirely palatable and convincing way.
The film is dedicated to actor Bernie Diamond, who plays Sam Worthington, a non-de-plume for an elderly gentleman in The Maple Hill Rest Home, whose passion in life is to send letters to unknown persons that he selects largely at random from a telephone directory. Bernie Diamond passed away in 2011, soon after the making of this film. Ironically, it is entirely by accident that Maggy becomes a recipient.
At the beginning of the film Maggy Fuller falls asleep in the middle of a college lecture, earning her an earnest reproof from her school Principal. At home, her mother’s recriminations echo the stereotypical adult sentiments: Maggy seems generally out of kilter with responsibility, focus, and purpose in life. She sings (badly) in a teenage band, and gossip suggests that her position is due entirely to the generosity of her boyfriend, Jay. Her best friend, Kimmy (Thurman), is a bottle-blonde whose personality is as synthetic as her hair colour; Kimmy represents peer pressure at its worst: cheating for tests is not only acceptable, it is recommended; Kimmy ingratiates herself with the band by offering networking opportunities for the band members to earn a breakthrough. The tenacity and confidence of the band members are fragile: fellow students scoff and gossip about their competence and lack of talent.
The director depicts a dysfunctional family initially.  Maggy lives with her mother (Eichner) in a low-rise apartment block; her father walked out on the family when she was small and thus she has no male role models. Her mother is a waitress, leaving her alone regularly for night shifts at work.
There is a total lack of Hollywood gloss about this film. It was filmed in Utah, with the aid of the Utah Film Commission, and this may explain an intangible overlay of religious values that become explicit in some of the dialogue and implicit in the plotline of the film. The setting is small-town America, with the cosy plastic décor in the diner, and sycamore and plane trees lining leafy avenues covered in drifts of leaves in autumnal reds and oranges. Inexperienced actors deliver lines stiffly in parts, with precious pauses in the dialogue which destroy mood and slow down the pace of the action.
If one can overcome these flaws and limitations, all of which become visible in the first thirty minutes, the story develops a sincerity and conviction about old-fashioned values and a moral centre designed to offer young people a way forward to gain confidence and a sense of self, leading inevitably towards a purpose in life.
Worthington’s letters to strangers are inexplicably astute and appropriate for the recipient. Maggy receives her first letter when she is despondent and bowed down by criticism and an abiding sense of failure: ‘You are an example that inspires and uplifts’ and ‘You are not alone.’ Child-cancer-sufferer, Michael, receives a letter about ‘courage in adversity’. The uplifting sentiments are so affecting that Maggy determines to find the sender and her investigations lead her to re-uniting temporarily with her estranged father, in the hope that he knows the sender.
‘The voice is the most beautiful instrument of all,’ avers Sam, whose real name is Stanley. This passing judgement acquires significance at the very end of the film. Sam’s ‘voice’ is expressed through his letters: he wrote 10 letters of encouragement one morning and takes Maggy on a circuit to find people who display signs of need. ‘I felt one of them was for her,’ he tells Maggy, who asks him what prompted him to deliver the first one to a young mother pushing a pram in the park.
Once the viewer is emotionally involved in Maggy’s destiny, the writer-director shamelessly tugs at the heartstrings, as slowly Maggy’s life unravels. Violins trill relentlessly in the background and, at one point, lugubrious choral work contributes towards an outburst of tears. There is no subtlety about the director’s approach here; but the homily is far more palatable than a parable from the pulpit.

A great year of African cinema for Namibian audiences 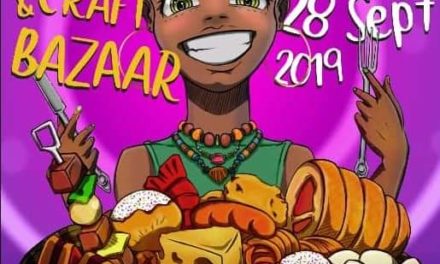