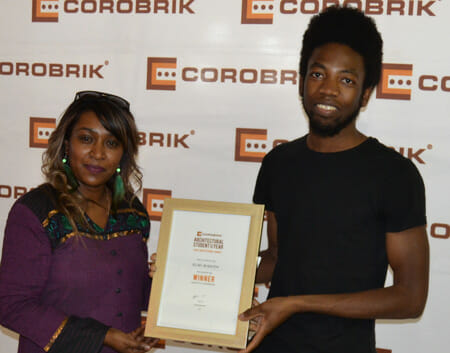 Local student, Elao Martin who is currently enrolled at the University of Johannesburg in South Africa bagged the 32nd Corobrik Architectural Student of the Year Award this year.

The Corobrik Architectural Student of the Year Award was a tribute to the great design talents that it had recognised in the past as well as a celebration of the latest generation of architects who would leave their legacy in the built environment of South Africa, according to Corobrik Commercial Director, Musa Shangase in a statement.

For his achievement, Martin received an award of R10,000 while Steven Moore won second prize of R8000 and Jean-Mari Steyn received the third prize of R6000. Ruby Mungoshi was presented with R6000 for the best use of clay masonry.

Martin will be one of eight young architects from major universities around the country who will be recognised for their talent an innovation throughout this year.

The winners of each regional competition will then go head to head for the national Architectural Student of the Year Award and prize money of R70,000. This will be announced in Johannesburg on 8 May 2019.

“Clay brick making in Kampala, Uganda, is one of many activities that have negatively affected wetlands’ ecosystems. An age old way of making; the process has created visible scars in the wetlands landscape through the mining of clay soil as miners clear large areas of land and vegetation for the raw materials used to make the bricks, leaving the soil barren, and the wetland unable to work as a carbon sink and water filter, or provide natural resources used for subsistence,” he said.

The radical design proposition is for the digging of clay soil for the brick making process, to create an edge or buffer between the informal settlement of Kitintale, and the wetland. This dug edge in the landscape will prevent the informal settlement from encroaching further into the wetland. As this protective edge of the wetland will inevitably transverse many human activities in the wetland such as farming, the project also explores ways that the process of clay brick making and its devices, can be colonized, and appropriated by these activities to create a sustainable landscape, long after the clay brick makers have left.

Through seasonal flooding, and after the water has subsided, the silt left behind will encourage farming activity to take up the area excavated, and the wetland can regenerate itself, while maintain the terraced landscape that acts as a protective edge.

‘Ten Sites of Architectural Seduction’ is the name of the thesis by Ruby Mungoshi. She said, “my interests this year have centred on investigations of the construction of beauty as a tool for seduction. My site is located on rue de Paris which is the most prominent street in St Denis, Reunion.”

Shangase said that in much the same way as it was committed to recognising the architectural talents of the future, Corobrik was also focusing on technological innovation within the rapidly changing built environment.

In May, Corobrik commissioned the very latest (Building Information Modelling) BIM files which can be downloaded from its website by architects and other property development professionals.

“This is an exciting time for clay brick which is essentially a technology that has stood the test of time. A technology that drove the original industrial revolution is today addressing pressing issues such as greater connectivity, better design coordination and increased productivity through various technology platforms. Today’s young professionals are looking to rapid and meaningful solutions backed by superior technology and connectivity. With BIM, Corobrik is now part of this broader technological landscape,” he said.

BIM is essentially the construction industry’s answer to digitalisation and represents a new way of working based on a far broader and shared intelligent technological platform. It is compatible with Revit and Archicad used by architects.

Shangase said that, for all professionals in the construction sector, BIM represented a shared and dynamic knowledge resource that is regularly updated. It marked a collaborative resource that would impact the entire lifecycle of a building – stretching from earliest conception to demolition.

“As a leading manufacturer of clay brick and related products, Corobrik is committed to and excited about being at the forefront of change in the construction sector. Although South Africa is trailing its international counterparts in the uptake of BIM, we foresee this as the future working model for major construction and infrastructure projects and look forward to collaborating with architects and construction professionals,” he concluded.

Caption: Presenting the award to Elao Martin is Shauneez Naidoo of Corobrik. Elao is this year’s regional winner from the University of Johannesburg. His winning thesis is entitled Reimagining Kitintale’s landscape through clay brick making. 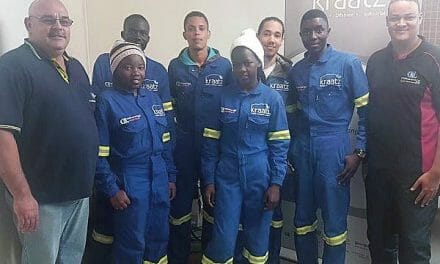 The jury is still out on who are the best welders, men or women?