Note to the Editor:

Ethiopian Airlines, a truly pan-African carrier, is the fastest growing and the largest airline in the continent. This continental pride hauler is reputed for acquiring rich aviation experience from operating the most modern and environmentally friendly fleet to owning the multiple largest state-of-the-art facilities, such as the largest Aviating Academy, MRO, Cargo & Logistics Services among others.

In its more than seven decades of successful air transportation services, the airline has been by the side of its African brothers and sisters during their good and challenging times including when their economies have encountered difficulties, of course, without leaving behind the vital connectivity role Ethiopian played during the establishment of the then OAU to the current African Union.

Coming to the specific issue of the complaint presented to your respected media, we really appreciate your effort to reach out the corporate communication department of the airline to balance your story- although you failed to do so due to wrong email address.

Noting the sensitivity of the aviation industry, in particular operating in Africa with many challenges, where Ethiopian is no exception, there might be flaws- such as the one that has become our today’s subject.

The root cause for the rerouting flight via JRO was due to circumstances beyond control as weather intervened into our normal operations- a case which we are very familiar in Europe and US as carriers halt flights due to heavy weather condition. This has forced us to go further and pick stranded passengers whose flights cancelled as a result. No matter what the cause has been- we do really apologize for the inconvenience caused.

However, we did our best and the clients were planed and protected with Egypt Air; unfortunately, at the last minute the airline claimed the flight was full and clients had to be taken to hotel in Addis Ababa with meal and other necessary services. Going further to this, we have compensated the client for one night expenses which the passenger paid for it.

Yet again, what we wish the media to note is that, as any other airline faces, the impact of unforeseen circumstance like weather, strike, and natural disasters on our business are beyond human control. However, we never remain idle rather do whatever is possible to avoid the impacts onto our esteemed customers as possibly as doing things including the rerouting of the flights.

Ethiopian Airlines, the largest Aviation Group in Africa and SKYTRAX certified Four Star Global Airline is a multiple awards winning carrier including the AFRAA Airline of the Year Award for the 6th Year in a Row. 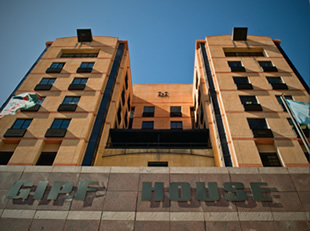 GIPF calls for proof of enrollment from children of deceased members