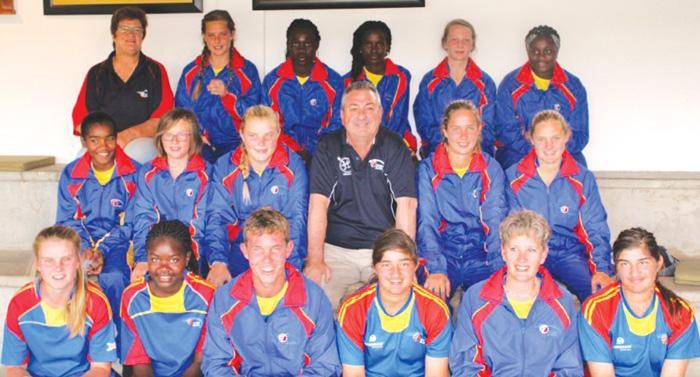 Namibia’s U16 ladies team won the three-day Easterns Girls Cricket Festival which came to a close last week Tuesday in Nigel, South Africa. The team didn’t concede a single loss during the entire tournament, clinching a 47-run win over North West in their final match to seal the overall victory.
Despite the long hours of travelling, the Namibian side dominated the happening from the onset when they drew first blood against Free State. Namibia scored 111-6 in their 20 overs. They then bowled out their opponents for a mere 37 with Wilka Mwatile being Namibia’s best bowler with 2-8 in three overs.
Northerns were up next. Again Namibia’s batting department was in fine form, scoring an impressive 121-6 after 20 overs. Northerns did put up a great fight but it wasn’t enough with Namibian bowlers restricting them to 101-7 after 20 overs thus loosing with 20 runs.
Day two Namibia came up against the hosts Easterns. Posting 121-4, Easterns was always going to face an uphill battle. They were bowled out after just 16 overs and 63 runs, giving Namibia a 58 run win. The following day was just as successful, albeit the guests from Namibia were made to work extremely hard for their win.
“With our Namibian Girls U16 team winning the tournament, it shows that we have the talent in Namibia to become a force in women’s world cricket. Their success is testament to the hard work being put in by Gareth Cloete, Namibia women’s cricket coordinator,” said Operations manager John Heynes.