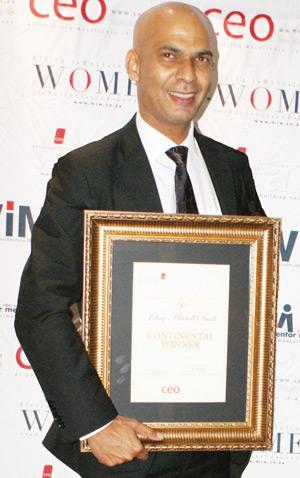 One in the bag; Chief Executive Officer of the Walvis Bay Corridor Group, Johny Smith proudly holds his award for CEO of the Year for Logistics in Africa.

The Chief Executive Officer of the Walvis Bay Corridor Group (WBCG), Johny Smith was named as the continental winner in the sector of Logistics at an awards ceremony hosted by CEO Communications in Johannesburg late last month.
The CEO awards strive to give recognition to men and women across a range of sectors through their programmes ‘Africa’s Most Influential Women in Business and Government’ and ‘Titans – Building Nations’. Over 11,500 nominations from 43 African countries were received.
The powerhouse of top tier executives gathered at the Gallagher Convention Centre to celebrate Africa’s Most Influential Women in Business and Government and Titans – Building Nations. The Gala Dinner was one to remember as the African roadshow ended by recognising the Continental Winners in each economic sector. The event was attended by most finalists from across the continent. Regional winners were recognised at regional events in South Africa, Mauritius, Zambia, Kenya, Uganda, Egypt, Ghana and Cameroon earlier in the year. The Gala Dinner aimed to give these individuals a chance to be recognised alongside their continental counterparts.

With over 600 attendees this was truly the opportune time for Africa to unite. Hosted by Derek Watts with entertainment from Yvonne Chaka Chaka, added much to an already star-studded event.
Smith received both the Regional and Continental titles for his informed and nontraditional approach to leadership. Programme Patron, Tsietsi Mokhele, CEO of SAMSA, emphasized that Africa needs more authentic leaders who lead with integrity, credibility and technical competence. “Men and women who are able to find solutions to the problems faced by the people of this continent,” Mokhele added. Smith said, “This could not come at a more opportune time where Namibia has incorporated into its National Development Plan 4, to develop Namibia as a Logistics Hub for the SADC Region. I feel very blessed and honoured to receive this award as recognition for exploring the trade opportunities  for other countries via Namibia during the past eight years at the WBCG.”
The Titans – Building Nations is the award for male CEOs while Africa’s Most Influential Women in Business and Government is an award for females.