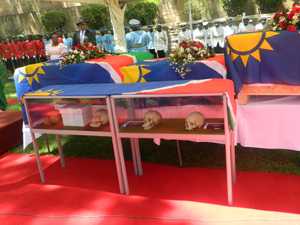 Four skulls that were repatriated to Namibia from Germany on display for viewing by the public at Parliament Gardens. The remaining skulls in the box could not be opened for viewing because traditional rituals had not been performed yet to appease the spirits.

The National Museum will be the final resting place for the remains of 35 people that were repatriated from Germany. The skulls and skeletal remains arrived in Namibia earlier in March and a memorial service was held at the Parliament Gardens on the same day. Honourable Jery Ekanjo, The Minister of Youth, National Service, Sport and Culture, Hon Jetty Ekandjo said that the Namibian delegation was well received by the Federeal Government of Germany particularly by officials where the remains were kept at Freiburg University and the Charite University in Berlin.

He added that he looks forward with eager anticipation for further repatriation of more human remains from Germany to Namibia, to give effect to the closure on the repulsive events of the early recorded history of the Namibian resistance and for their soul to rest in eternal peace. The public were allowed to view the remains and perform rituals for the dead. Isabella Guriras, Senior Traditional Councillor did traditional rituals, while Mr H Eichab recited a poem and the #Nu-Koen Cultural Group from the Damaras performed a ritual dance. After the viewing ceremony and community rituals, the skulls and the skeletal remains were transported to the National Museum for storage and display. Meanwhile, Die Linke, a political pressure group on the far left of the political spectrum in Germany, is creating an upheaval over the Herero genocide and reparations to the victims’ descendants. 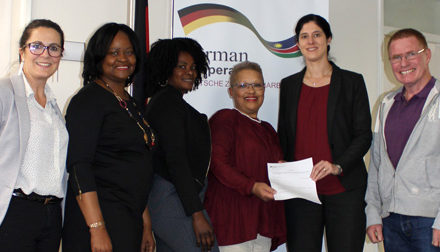