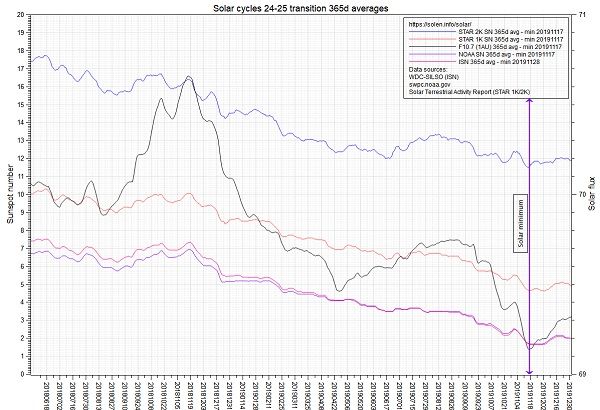 Visual: Measurement of transition phase between solar cycle 24 and 25

This week’s visual is rather baffling but it does portray one single important fact which helps us to understand local weather. It shows various telemetries that measure solar activity, in particular the occurrence and distribution of sunspots. The experts’ conclusion is that by using a specific methodology, they can pinpoint the tipping point between two sun cycles. Their assessment is that the weakest point in solar activity happened on 17 November last year and that as of the next day, we have entered a new cycle.

There is a very enlightening (but very technical) article by two solar experts in which they discuss their approach to the raw sunspot data. That article can be read at https://www.researchgate.net/publication/342548883_Solar_Cycle_25_Started_on_November_17_2019_with_365_Days_Smoothing.

It is not for the everyday person who only has a passing interest in the weather but if their argument and their calculations are correct, it means we are at the beginning of the next solar cycle, number 25.

Making rough comparisons to Namibian weather history, there is one noticeable fact. When a solar cycle is in the ascending phase, Namibia tends to have a series of wetter years, while the dry periods follow in the descent. Given that solar cycles roughly last about 11 years, it implies that we will be entering a wet phase within the next year and that it will continue for anything between 5 and 6 years.

This does not mean that it is a given since the correlation is not absolute and from experience, we know that we get very wet years in dry phases and vice versa. But similar to the Southern Oscillation index of the Australian Bureau of Meteorology, where there is an observed but intermittent correlation between barometric conditions in the Pacific and rainfall in Namibia, one can not disregard the fact that the sun plays a major role in Earth’s weather and that local conditions are not exempt from this impact.

The past two weeks stood out for their monotony which is in line with solar activity at a minimum. There is really nothing eventful in this winter season so far, except for the brief cold intrusion at the middle of June. The pattern is as predictable as can be and the only variable is whether Oosweer conditions will actually reach the coastline or fizzle out about 30 km from the shore.

Clear skies, cold mornings, warm afternoons, a predominantly north-easterly airflow, and warm to hot conditions at the coast – this practically sums up the daily weather for two weeks.

There is very little of interest on the forecast maps.

A cold front approaches the Cape on Monday, makes landfall during the night bringing cold to very cold conditions to the Karas region, continuing into Tuesday. By Tuesday evening the front will have moved across southern Namibia into Botswana.

On Wednesday morning, the cold will come from the east but by that same evening, conditions should have reverted to the predictable pattern we have seen these past two weeks. For the latter part of next week, warm to hot conditions are again expected at the coast with strong winds in the southern Namib. 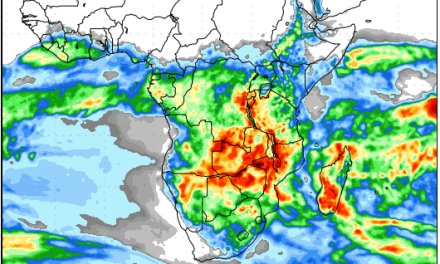