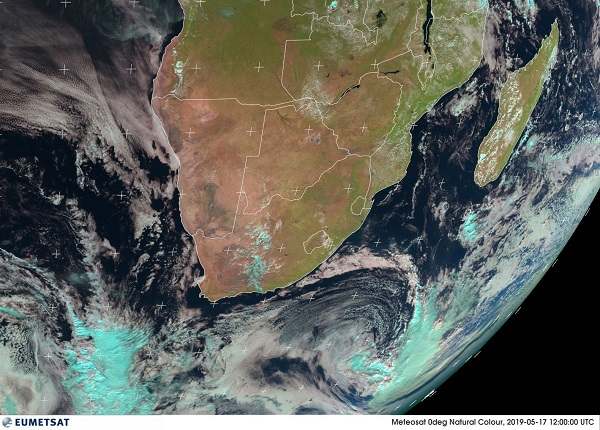 Visual: Eumetsat RGB composite as at noon on Friday 17 May. Original taken by the Eumetsat geostationary satellite over the Greenwich meridian.

The three-layered atmosphere was much in evidence this week. Surface conditions are under high pressure control for about three quarters of the country. The nights are cool to cold with very little wind, followed by quiet days where the temperature battles to reach 30°C. Airflow was predominantly westerly to south-westerly.

At the mid-levels between 15,000 and 25,000 feet, a well-demarcated trough ran from north to south, spread out over a very wide area easily covering 400 kilometres from west to east. A broad layer of intermittent cloud appeared in the trough but the general texture was flat. The cloud tops were suppressed by the layer above. Airflow was predominantly northerly. This, in part, contributed to the pleasantly warm days.

At the alto levels above 25,000 feet, the atmosphere is relatively thick with the 200mB surface sitting at around 35,000 feet. This is a spillover from the high pressure cell sitting south of Madagascar, leading to so-called ridging that controlled conditions deep into Angola, Zambia, and even Mozambique. The upper level high pressure control also contributeed its part to the warm to hot days through a mechanism knows as diabatic compression. Due to its higher density, it tends to sink later in the day, compressing the air below it, releasing energy and raising the ambient temperature on the surface.

In Namibia’s northern regions, the combined effect of warmer tropical air from the north and diabatic compression from the alto level, resulted in afternoon temperatures of around 33°C to 34°C in many places.

In fact, the entire sub-continent was subject to some form of high pressure control for the duration of the week. This is amply illustrated by this week’s visual which is an RGB (Red/Green/Blue) reconstruction done by a computer based on the telemetry from the observing satellite. It shows clear skies over most of southern Africa with only the weakest intrusion of mid-level moisture from central Angola through Namibia and into central South Africa. This is the fluffy light blue patch.

Not a single report of rainfall anywhere in Namibia was received.

Overall conditions for the country as a whole remain fairly static for the weekend.

There is very little airflow from the north, so the skies should be clear. Although the South Atlantic high pressure cell is some distance offshore, its local impact will be minimal but overall the entire sub-continent is under mild high pressure control with the 1016 mB isobar running across the continent from northern Angola through Zambia to northern Mozambique.

1016 mB is not very high in terms of barometric pressure but is sufficient to suppress convection thus zero chances for rain.

By Sunday night, a cold front is situated about 500 km offshore from Cape Town. It is however not expected to make landfall as it becomes fragmented as it moves closer to land.

By Monday, the northern extension of the frontal system may have a small effect in the southern Namib between Oranjemund and Lüderitz with both low level and alto level clouds appearing. It will however be very brief as it moves inland in close proximity to the Orange River valley.

Monday and Tuesday will be clear skies for almost the entire country except the southern-most strip of the Karas Region where the spill-over from the Cape’s frontal system can lead to some activity. Wednesday may see some cloud formation in the Karasburg district close to the South African border with a small chance of extending slightly further north along the border with the Gemsbok Park. 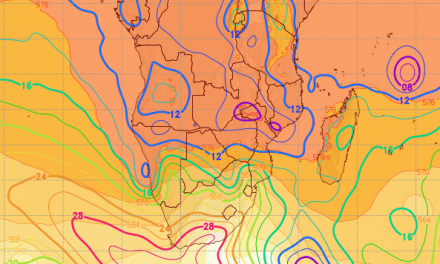 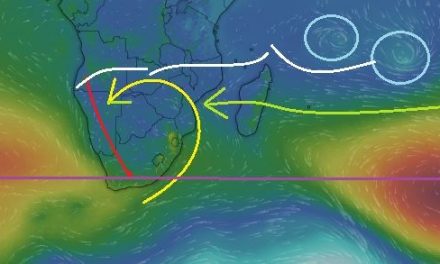