Come dine with me Team Namibia 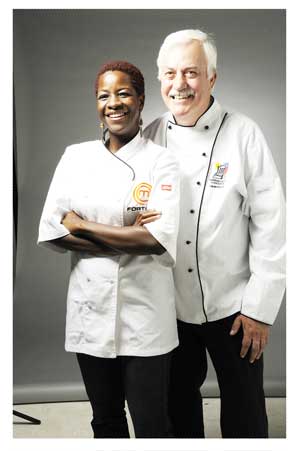 Hosts Fortune Kangueehi, an advertising account manager at Advantage Y&R by day and passionate cook by night, with co-host, Namibia’s best known chef, the inimitable Tom Mutavdzic. Kangueehi was one of 18 contestants, and the only Namibian in the South African MasterChef 2012 competition. Mutavdzic needs no introduction.

Team Namibia is calling on all Namibians aged 16 and older to enter the Taste of Namibia 2013 cook-off competition, sponsored by FNB Namibia and Pick n Pay, to celebrate Independence.  Namibian chef and hopefuls are challenged to put their culinary talents to the test by offering a recipe for a unique dish prepared from a set list of 23 Team Namibia ingredients. Submitting the recipe enters the chef for the Taste of Namibia competition. This must be done on or before 01 March.
These recipes will then be scrutinised by the Namibian Chefs Association (NCA) who will select 10 semi-finalists to prove their worth to the judges on Friday, 08 March 2013. Subsequently, five finalists will be selected to compete in a live cook-off competition on Saturday, 23 March at Pick n Pay in Windhoek. The winner will walk away with a prize valued at N$23,000!
Lizette Foot, General Manager of Team Namibia explained “The purpose of the campaign is to highlight the fantastic food and drink options made available by Team Namibia members, and simultaneously educating consumers that there is no need to rely on imported goods when it comes to preparing a good quality meal. Popular cooking shows such as Masterchef and Ready Steady Cook have created a new movement in food appreciation around the world, and we want to encourage all Namibian foodies to indulge in this trend with the fantastic local produce available right here on our doorstep”.
Foot said it is compulsory for contestants to make themselves available to participate in the semi-finals on Friday 08 March at the Polytechnic Hotel School and for the cook-off finals on Saturday, 23 March at Pick n Pay.
Members of the Namibian Chefs Association have been appointed to judge the Taste of Namibia competition: Ralf Herrgott, Chef Lecturer at the Hotel School, assisted by Twapewa Kadhikua, of Xwama Cultural Village and Rebecca Hidulika, of Fusion Restaurant, will decide the fate of the competing chefs.
The selected lines are maize meal, self-raising flour, spaghetti, macaroni or elbows, rice, white or brown sugar, mushrooms, cabbage, sweet potato, beetroot, tomato, brinjal, spinach, fresh or longlife milk or yoghurt, cultured milk, giraffe, kudu, chicken fillet, chicken liver, eggs and hake loin. Chefs are allowed to choose one seasoning consisting of either Tomato & Herb Spice Mix with Coarse Namibian Sea Salt, or Bellpepper & Corriander Spice Mix, or Hibiscus & Lemonpee, Lemongrass and Ginger Herb Spice mix. !Nara Food Oil (plain) is the available cooking oil.
Weizen Beer Sundowner completes the menu.
The ingredients are supplied by Team Namibia members Bokomo Foods, Bakpro, Namib Mills, Sugar King, Agricon Mushrooms, Oshikoto Fresh Fruit & Vegetables, Namibia Dairies, Bon Apetit, Namibia Poultry Industries, Hangana Seafood, Desert Hills Farming & Cooking, and Camelthorn Beer. 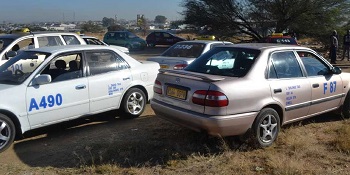