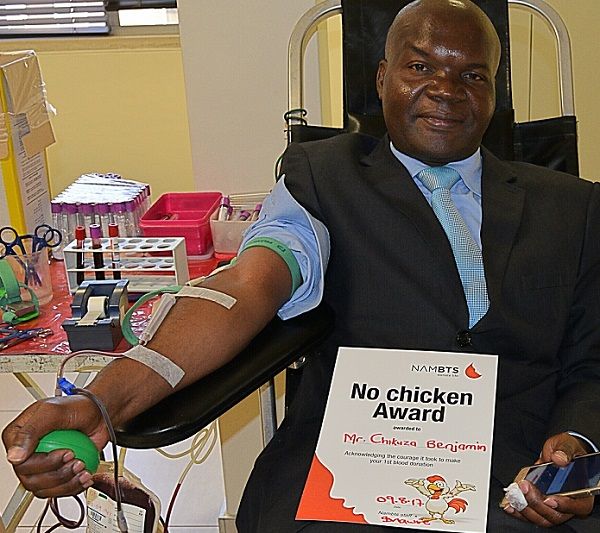 First-time blood donor Benjamin Chikuza happened to be at the headquarters of the Namibia Qualifications Authority (NQA) for a meeting when he noticed a blood clinic was underway. He immediately joined the Authority’s staff to give “corporate” blood, in the process becoming one of the less than one percent of Namibians who regularly donate blood.

“I came to the NQA office for other business and noticed there’s a blood donation drive going on. I grabbed this opportunity simply to set an example for others to follow suit and donate blood to give this precious gift like I did today” Chikuza said.

The Blood Transfusion Service of Namibia said the country’s health services need about 2800 units of blood per month. Since so few Namibian contribute and since only 450 ml is collected from each individual during a single sitting, there is an almost permanent shortage of blood.

While only 14 units were collected on Wednesday at the Qualifications Authority, this is sufficient to save the lives of 42 people. Blood transfusions are typically administered to mothers who bleed excessively during or after childbirth, premature babies or those with jaundice, patients awaiting organ transplants as well as accident and other trauma victims.

“An average healthy adult has over five litres of blood in his or her body. Only 450 ml is collected during one donation. However only 0.8% of the eligible Namibian population donates blood. As a result, the country is perennially faced with a shortage of blood as there is no known substitute for it, thereby putting hundreds of lives at risk” stated the Blood Transfusion Service.

“Given the challenges with blood supply and the increasing need, we decided to step up as a team and become part of the solution by organizing this blood donation drive, which is just the first of many”, said NQA Marketing and Communications Manager, Catherine Shipushu.

From the 14 who donated, six are first time donors like Julien Broekstein, an Evaluations Officer at the NQA. Afterwards she said the experience had such a profound impact on her that she is willing to do it again. “I decided to donate blood today because I want to make a difference in someone’s life. I am very proud of myself for being brave and I will definitely become a regular blood donor” she said.

Namibia set to receive another donation of 200,000 doses of Sinopharm vaccines

Invest in nutrition for growth 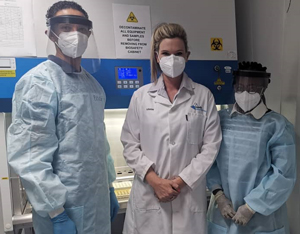