The Craton Foundation under the “Eye See The World” initiative, in partnership with Tobich Optic and The Lions Club, handed over 25 glasses to pupils at Tobias Hainyeko Primary School in Katutura on 15 April.

Mr Laban Shidute, Principal, Tobias Hainyeko Primary School said that Craton Foundation approached them for this initiative and they tested all 1642 pupils. 40 were identified and these underwent a second screen check to determine the level of their sight and the kind of glasses they needed. In the end, 25 pupils who urgently needed glasses were identified. “Sight is very important to a pupil because, if they can not see what the teacher is demonstrating or writing on the board it is very difficult for them to learn,” emphasised Shidute
Shidute added that the Foundation will also build classrooms at the back of the school. Craton Foundation has confirmed that the erection of the classrooms will start middle May after the school holidays.
The trustees of the Foundation are Kobus van Graaan, Chairperson, Margareth Gustavo, Trustee, Sister Roswitha Pelle, Trustee and Ziggy Hartmann, Founder and Company Secretary. Lizelle Rousseau.
The Lions Club donated books to the school’s mini library and Optometrist, Tobich Optics handed over the glasses to the pupils and adjusted them to fit perfectly.
The Craton Foundation aims to screen and provide glasses to primary school children and has to date reached out to more than 3 000 primary school children in Windhoek. The initiative was launched in 2013.

Fellows and Fulbrighters ushered off 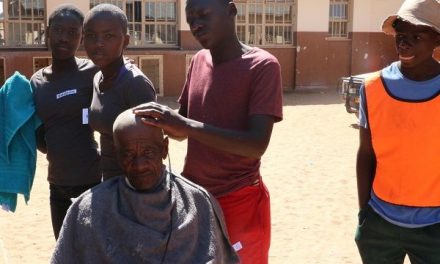