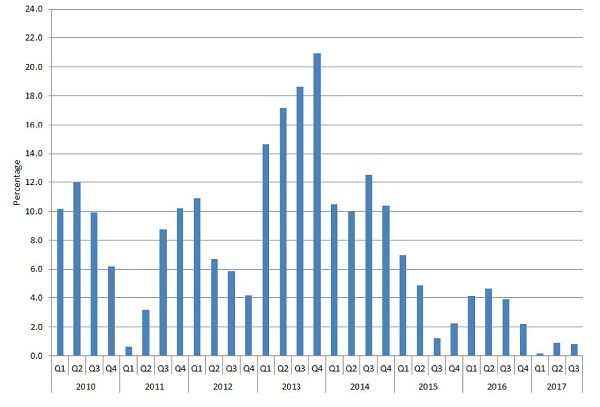 As the curtain falls on 2017, there is a general feeling of trepidation in business circles. This year will certainly go down in history as the most difficult for the Namibian economy since 1990. And from this reality arises the question asked by every single individual I speak to. What are the chances of 2018, against all rational expectations, to be even worse than 2017.

After the calamitous 2016, it was anticipated that 2017 can not possibly be worse, but it was. Last year was to a certain extent saved by the buoyant first half, at least for retail and asset sales. Unless a company was involved in the construction sector, 2016 was after all not so terribly bad. This is also reflected in the overall 1.1% GDP growth figure – dismal compared to the previous five years, but not contractionary, not yet.

In this regard, there is a visible disjunct between real-life trading conditions and official statistics. According to the NSA’s quarterly figures, the economy was technically in recession for the second and the third quarters of 2016. This has been well documented, and the information is freely available. In the fourth quarter there was a small positive blip due to only one industry’s improved output, diamonds.

This year, however, the horror story only continued with all three quarters, first, second and third, registering contractions. That certainly counts for more than a technical recession despite the post-quarter adjustments distorting the picture somewhat with the up and down revisions of the GDP estimates.

The quarterly statistics have lead most analysts to revise their own GDP estimates for 2017 down. For example, PSG Research, earlier this year was the first analysts to stick their necks out on behalf of the economy and project a 2.3% GDP growth. Following the release of the third quarter estimates, even this normally positive group now expects 2017 to contract.

On the official side, a similar pattern has emerged. Earlier in the year, the Ministry of Finance was still speculating with a possible 1.8% GDP growth but after the official downgrade by Fitch, the latest rhetoric tends to follow the agency’s cue of 0.6% real growth.

The divergent estimates are to be expected. Going by developments in the first semester, growth should have started to become manifest in the official statistics. What kicked the ball back, I believe, was the revelation during the mid-year budget review, that another N$2.2 billion of outstanding invoices have been disclosed by various ministries, only after the tabling of the national budget early in March. That certainly cast the cat amongst the pigeons with the minister referring several times during his review speech, how disastrous that revelation was.

Earlier in this year, I stuck out my neck, saying the economy was already through the worst part of the ditch but that it will take at least six months to show up in macro-economic data. I still believe that is the case, but I have to admit, the third quarter statistics floored me, like it did many other analysts who could also point out the green shoots, yet disparingly eyeing the monthly Private Sector Credit Extension data from the Bank of Namibia. Just when we thought PSCE could not possibly go below 6%, it did.

There are many positive elements visible in the economy over the past quarter. I have listed these in a previous commentary so suffice to say, according to all indications and available data, there is ample available liquidity in the local banking system.

The important question then becomes, why are banks not lending? Why are they actively investing in the capital market but not in the economy.

This is of course, good news for the government. Both longer and shorter instruments are in high demand, typically oversubscribed by anything between 1.3 to 4 times. But at some point, it should become obvious that for as long as retail credit is restricted, the economy’s short to medium term prospects will remain bleak.

Perhaps one of the few good things that came out of this year is the realisation that the government can not be bullied in the capital market. At the beginning of 2017, the Bank of Namibia had to use creative ways to support debt instruments. By May this has turned, and for the second semester, government debt was again in vogue.

I believe this resulted from the relative ease with which the Ministry of Finance was able to access alternative funding sources, and the significant sizes of the loans. In my mind, there was a fairly clear message: – if the ratings agencies say our creditworthiness stinks, and if the capital market rebels, then why is it so relatively easy for the government to secure additional off-balance sheet financing. Obviously, there must be much more depth in the Namibian economy than what all these so-called experts claim. Similar to what happened in US markets after 2008/09, I think even the most acerbic asset managers realised it is to their detriment to stay out of the Namibian capital market, regardless of sentiment, regardless of the deficit, and regardless of the ratings agencies.

It is now official, unemployment is down to zero