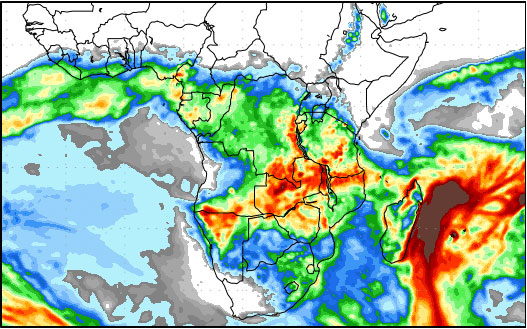 The first half of the week was characterized by the collapse of the cores of both the South Atlantic and the southern Indian high pressure cells. At around Wednesday, both cores only measured 1018 mB, and were located relatively far offshore.

When the South Atlantic high is weak and its core displaced to the south, its immediate effect on the south-west coast of Africa is much reduced. During summer, this core typically stays offshore, slipping around Cape Agulhas on its regular passage from west to east. But its outer rim at 1016 mB has a dirct impact on the western half of South Africa, Botswana, Namibia and the south-western quarter of Angola. The effects are most visible in the atmosphere’s lower strata from ground level to about 18,000 feet, i.e. the so-called 500 mB surface.

This week’s progressive synopsis showed just how important the South Atlantic high is for local weather.

The transport of moisture from the Indian Ocean continued every day, following more or less the southern limit of the Inter-Tropical Convergence Zone. This means substantial moisture penetrates the Namibian atmosphere from Zambia and Botswana. The origin is the Indian Ocean and the path runs across Mozambique, Zambia, Zimbabwe and Botswana until it eventually reaches central and southern Angola, as well as Namibia.

This intrusion carries a high vapour load, it is light and buoyant. It brings in lots of clouds, which, like everyday this week, penetrates deep into Namibia up to the edge of the escarpment. Depending on local conditions, in may even descend down the western face of the escarpment onto the coastal plain. In essence, the north-eastern airflow creates conditions that are conducive to rain.

Enters the South Atlantic high from the south-west. It is cold, dry and dense. It creeps up the Namibian coastline from south to north, pushing across the coastal plain until it encounters the escarpment where the air starts to ascend, depending on the strength of the low pressure system over the Namibian interior. The impact from the South Atlantic high creates numerous local events which are unpredictable, at least on a localised scale.

At the beginning of this week, a strong cyclonic circulation was present on the surface over the Namibia Angola border. This circulation was driven by the northern extension of the South Atlantic high. But instead of obliterating the intrusion of moisture, it energized the low pressure circulation, drawing in moisture from Zambia, enhancing convection and producing spectacular rainfall over Kavango West, Owamboland and the Kunene Region.

This system migrated south with the bias to the west. In its wake it rained over Kunene, Erongo (up to the coast), Otjozondjupa, Khomas, Hardap and even Karas. On weathermaps, the progression could be seen clearly as the system developed from a low pressure intrusion into a full-blown trough that ran from the Kunene Region through Namibia and through South Africa up to its southern coast at Port Elizabeth.

The intrusion of moisture from Zambia and Angola continues throughout the weekend but it is opposed on the surface by the South Atlantic high. A very prominent convergence zone stretches from the Erongo Region to the Kalahari, through Botswana and into South Africa.

Local rainfall conditions remain positive during the weekend but only for the northern half of Namibia. This continues into Monday.

Meanwhile, a tropical depression just north of Madagascar is expected to develop into a proper Tropical Storm, moving closer to the island’s east coast and migrating southwards, becoming stronger as it does. By Friday afternoon, this depression has already evolved into a moderate tropical storm labelled Enawo with winds around 35 knots.

The development of Enawo will replicate conditions of three weeks ago when “Carlos” developed in about the same spot, also following a trajectory close to the Malagasy coastline, moving from north to south.

The combination of low pressure over northern and western Namibia, amplified by the zonal airflow from Madagascar to Zambia, portend well for local rainfall.

From Tuesday onward, rainfall expectations are very positive for the whole country but the bias remains in the north, the north-west, and the western escarpment down to the Orange River. 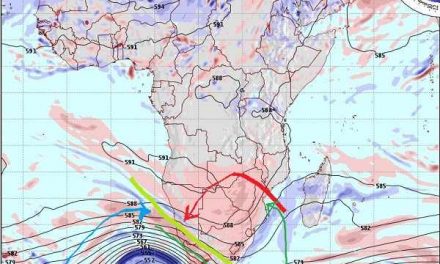 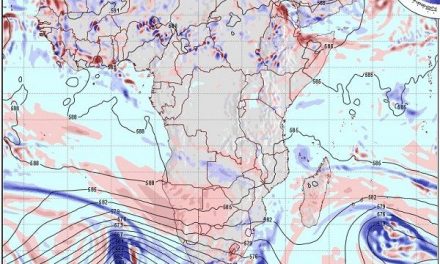