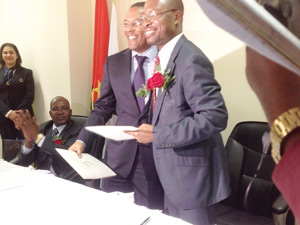 Dr. Ricardo D`Abreu, Vice Governor, Banco Nacional de Angola, behind the Governor of the Bank of Namibia, Mr Ipumbu Shiimi, on Monday this week, when the two central banks announced a deal to accept the Angolan Kwanza as legal tender in Oshikango.

The Governor of the Bank of Namibia, Mr Ipumbu Shiimi, this Monday, 22 September signed a Currency Conversion Agreement between the Bank of Namibia and Banco Nacional de Angola paving the way for the use of the Kwanza at the border town of Oshikango in northern Namibia. Oshikango is a trade hub with bonded warehousing where hundreds of tonnes of goods destined for traders in Angola, leave Namibia every day.
“The Bank of Namibia and other stakeholders have been concerned about the decline in trade between Namibia and Angola, in particular the once thriving trading business in Oshikango. In an attempt to understand this development, the Bank undertook research, which showed that trade between Namibia and Angola was conducted in a foreign currency, mainly the US dollar, as an instrument of payment. Therefore, a shortage of the US dollar contributed to the decline in trade. This prompted the Bank of Namibia to engage the Banco Nacional de Angola to look at the possibility of entering into a Currency Conversion Agreement,” the central bank said in a statement.

The Bank of Namibia said, “After extensive discussions and consultations, the two sister central banks concluded this agreement to facilitate reciprocal conversion of the national currencies of the Republic of Angola and the Republic of Namibia. It will allow business people and traders to legally export either Namibia Dollar to Angola or the Angola Kwanza to Namibia and exchange them into local currency for trading purposes. The agreement will further strengthen the economic relations between the two countries.” “The conversion of the currencies will be applicable only to the border towns of Oshikango and Santa Clara, and the two Central Banks will continue this engagement to ensure the success thereof. The possibility of extending the arrangement to other towns along the border will be investigated and such results will be addressed accordingly. The agreement will be effective six months from the signing date,” the statement concluded. 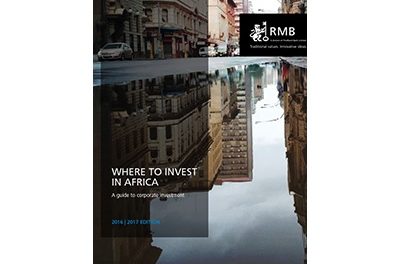