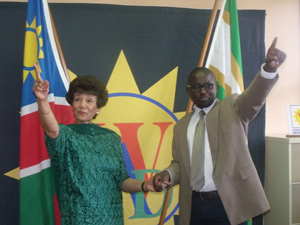 Women’s Action For Development (WAD), Executive Director Veronica De Klerk will make way for Salatiel Shinedima, Executive Director Designate in office following the recent media briefing earlier this week were they announced her retirement.
De Klerk said that although she still has lots of energy and there are still many ideas competing in her mind to be implemented, she believed that a leader, whatever his or her success should release that there is a time to come and a time to go.
“A leader should make room for the younger generation to take over the reigns, in order to introduce new approaches and alternative ways of addressing challenges of national importance,” she said.
De Klerk introduced Shinedima as her successor, who she mentored for a couple of years when he was employed by WAD and added that he is a natural leader with a sharp intellect and an excellent communicator.
Shinedima has a Master’s Degree from the University of KwaZulu Natal in South Africa and he will be occupying his new office on 1 September 2014. WAD celebrated their 20th Anniversary with the theme ‘Celebrating 20 years of empowering the powerless 1994-2014’.
“We have seen too many women’s workshops, women’s demonstrations, women’s conferences and women’s marches without the inclusion of men, therefore if men are not present to participate in these discussions, women will forever be talking in a void,” she emphasised.
She said by thanking her staff both male and female, she will always carry WAD in her heart and be there for her successor whenever he needs her, for now she is going to take a well needed rest before she decides what to do next.
Shinedima thanked De Klerk for steering WAD from its humble beginning to a reputable and well respected Non-Governmental Organisation, growing from strength to strength.
He said WAD will be moving forward by putting much effort into the new generation of men, to grow up to become real men, who can take disappointments and rejection and to bravely walk away from provocation that can lead to gender based violence.

Don’t hit her, just kiss her!