Gideon Nasilowski nevers let his disability get the better of him.

Born in Windhoek, Gideon Nasilowski has always strived to be the source of inspiration that the youth lack in sports. His role as the chairperson of the National Federation of People with Disabilities in Namibia, he says he feels is to impact positivity into everyone. The young man, has never let his disability be the final stop for him but uses it as an advantage to push and challenge himself to achieve success.
He is very competitive and got into the sport of swimming, in 2010, after he was told by his friends whilst watching the paralympics that he probably couldn’t do what they saw the others do. “I told them not to tell me that I couldn’t do it, because I believe that I can do anything. I am very competitive” he stated.

Although he was very obese at the time, he trained long and hard, changed his lifestyle to a much healthier one and today the results speak for themselves. Gideon Nasilowski is the first Namibian Paralympic swimmer, and had his first competition in December 2010 at the CGA Championships in South Africa. “At the competition I felt the passion that fellow swimmers had, I was amazed by their spirit and I fell in love with the sport,” he stated.
Over the years he has continued to keep up his good timing and has kept breaking most of his records, building from strength to strength with each competition. “I am fully convinced that I will qualify for Rio 2016” said Nasilowski. His view is that “We need to encourages the youths to get into sports and creative activities, because you can always do sports without an education”, as a way of motivating young people from indulging themselves in negative activities like drugs and alcohol abuse.
The motivational speaker and singing artist said he dreams of opening his own swimming academy where he can teach swimming to everyone, “I see swimming as a basic skill that everybody should have, it is very important, you never know where you might find yourself one day,” said Gideon.
Gideon and his friend Mike Hamukwaya opened Lions club in Katutura, last year “I would  want for us Namibians to be feared whenever we compete anywhere in the world and to be able to represent the country to the very best of our abilities. They must recognise us as competition, we have that potential.” The club helps create a platform for other paralympics to train in athletics and swimming, this is a way of increasing the number of well trained and fit paralympic sportsmen and women in the country. He is set to take part in the Pan Pacific Para Swimming competition in August this year and will be needing some sponsorships to represent our country once again. “I want to show that yes I can do anything, I can be a full time worker and great sportsman as well. I am determined to always do better and I believe that perseverance and determination are the keys to achieving goals,” he concluded. 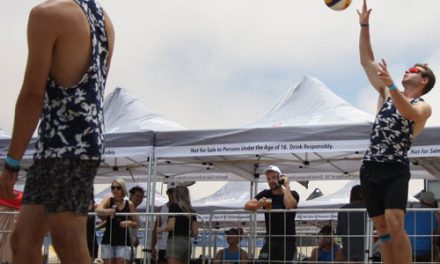