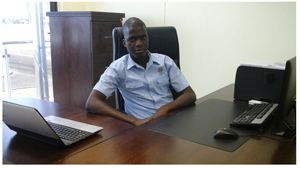 In operation since November 2013, trading at the Ongwediva and Rundu Hubs has managed to surpass N$1 million in trade. The hubs were built to aid local farmers market and store their produce, and help enhance the capacity of various agro-producers in the country.
Jacob Hamutenya, Regional Manager of the Ongwediva Fresh Produce Hub gave an update of the progress of the hubs and said, “When the hubs became operational they offered an alternative market especially for small-scale farmers who relied solely on the informal market. The hubs have thus helped curb some of the post-harvest losses usually experienced by farmers due to a lack of marketing and storage facilities. The hubs have been very instrumental to bringing fresh produce closer to consumers and make it easy for small-to-medium businesses to source most of the produce they need at one place at affordable prices.”

“We expect more farmers to bring in their produce. Local retailers will also be coming through our hubs. There is a poor understanding of AMTA(Agro Marketing and Trading Agency)’s operations amongst farmers, buyers and the general public. We will engage in public awareness campaigns to engage with both farmers and retailers soon. We want to draw the business community to come through our doors. We acknowldge the significance rain has on farmers but most of our suppliers engage in irrigration,” said Hamutenya.
“The hubs have provided produce to local retailers, various tourist establishments and even sources the Angolan business community. Produce is sourced from all over the country, from the Green Schemes, such as the Etunda Irrigration Project, the Sikondo Irrigation Project, the Ndona Linena Irrigation Project and various farms in the !Karas Region. Only produce that cannot be grown locally is sourced from South Africa,” added Hamutenya.
AMTA is a newly established agency under the Ministry of Agriculture, Water and Forestry responsible for the management of Fresh Produce Business Hubs in Namibia. The agency has been able to market potatoes, sweet potatoes, grapes, butternuts, carrots and tomatoes. A third hub will be built in Wanaheda, a suburb in Windhoek. The hub will be twice the size of the Ongwediva hub which measures 10 000 square metres.