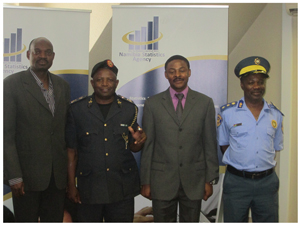 Pictured at the launch of the Business and Investment Climate survey, are Leonard Kamwi, Head Advocacy and Researc at the Namibia Chamber of Commerce and Industry, Daisry Dumeni: Manager of Marketing and Public Relations at NCCI, Klaus Schade, economist at the Institute for Public Policy Research and Bjoern Vogler of the GIZ. (Photograph by Hilmah Hashange)

The 2014 Namibian Business and Investment Climate Survey (NamBiC) was launced this week.  The (NCCI) Namibia Chamber of Commerce and Industry, (NMA) Namibian Manufacturers Association and Deutsche Gesellschaft für Internationale Zusammenarbeit (GIZ) working on behalf of the German Government and the Institute for Public Policy Research (IPPR) have partnered to carry out the comprehensive 2014 NamBiC survey.
Since inception in 2009, the annual NamBiC survey has become an important instrument to improve the enabling environment for businesses, especially for small and medium enterprises (SMEs), as the survey is able to generate first-hand data on the perceptions of businesses regarding the business and investment climate and the obstacles to business development and growth.

The results are insightful to both the NCCI and NMA, establishing guidelines for targeted and results oriented public-private sector dialogue. Government interventions can therefore be much better targeted to the real needs of businesses.
Issues addressed on this basis through Public Private dialogues and other means include, amongst others, access to land, skills development, utility costs and access to new markets. This process is on-going and will be adjusted according to the results of the forthcoming survey. It will now be possible to evaluate the effectiveness of initial consultations and to determine trends and factors influencing business growth.
The 2014 survey, which kicked off on Monday this week, will be adjusted and will include roughly 600 companies that are randomly selected to form part of the survey. The survey covers all areas of the country and among these are 25 businesses in the Zambezi region and atleast 200 from the Khomas region.
According to economist Klaus Schade of the IPPR, the response rate of the 2012 survey was 50% but he said he hopes that it will increase because of the regional representation of the survey.
He added that the survey will consists of core questions such as employment and regulation environment and that an in-depth study will be carried out on a focus area of “Trade accross borders.”
“Different economic sectors are also covered in the survey because of the different structures of businesses in the regions, such as agriculture and manufacturing,” Schade noted.
Schade said 200 interviews of informal traders will be conducted in order to capture the number of jobs created as a result of economic activity in the  informal market. The survey will be finalised in early January 2014.
The results of the 2013 survey will be released in the first quarter of 2014.