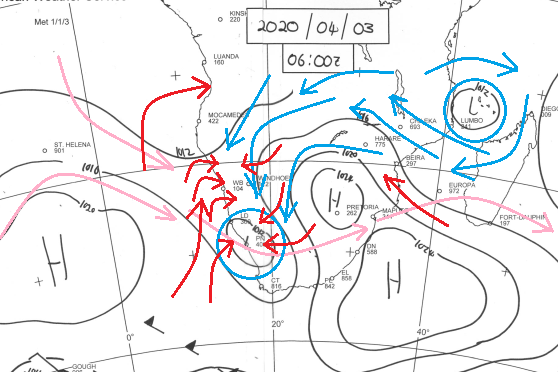 Visual: Surface pressure over central and southern Africa as on Friday morning 03 April.

This week’s rather busy visual is an attempt to illustrate how airflow at various levels are driven by the high and low pressure cells that are scattered across the region.

The standard synoptic chart shows barometric pressure on the surface, i.e. from sea level to roughly 850 mB which is generally up to about 5000 feet above sea level. That is more or less Windhoek’s elevation above sea level. These airflows are all indicated by red arrows.

Next up is the 500 mB level, usually at about 18,000 feet. These are indicated by blue arrows and two blue circles. This elevation is at the upper end of what is generally regarded as ‘mid-level’ which is roughly from 12,000 to 20,000 feet.

Much higher up are the alto levels between 35,000 and 45,000 feet or around 200 mB or less. At this level the so-called jet streams blow. They do not have an immediate effect on localised conditions but they act as major movers that shift entire systems. In this week’s case, one can see that the jet stream blows from west to east and that contrary to its usual behaviour, it also blows from west to east over the tropics.

Thus it is important to visualise the different colours on different elevations and to try and form an understanding how these systems interact at the transitory levels. This interaction has been vividly displayed by Namibia’s weather over the past two weeks.

Note that the South Atlantic high pressure cell is about 1000 km offshore with its core displaced to the north by a few hundred kilometres and tending to be on the weak side at 1020 mB. The southern Indian high sits south of Madagascar with a regular core reading of 1024 mB. It is smack on track where it is expected to be, straddling the 33°S latitude. The larger cell ridged back over the continent forming a secondary core over eastern South Africa and Lesotho, and driving the prominent anti-cyclonic circulation over the entire sub-continent. Incidentally, it is this secondary core that brought the first cold weather to the South African highveld and to Lesotho from Wednesday onwards.

The implication for Namibia is that as long as the mid-level airflow stays north-easterly to northerly, i.e. from Zambia and from Angola, cloud formation between 12,000 and 20,000 feet will be observed every day, just as it happened this week. It indicates that sufficient moisture is present at the right level but that actual thunder storm development will be determined by condition both below and above the mid-level.

That this can happen anytime in an atmosphere as unpredictable as Namibia’s was also demonstrated this week when a convective cell developed over the Mariental district on Thursday, causing a deluge in some areas of up to 100 mm while relatively close by, falls only measured 18 mm or even as little as 4 mm.

The intermittent conditions of this week continue during the weekend with good, visible cloud formation over the western, northern and central areas, but falls will be isolated and brief.

Similar to last week, rainfall prospects diminish as the weekend continues while the mid-level trough retreats to the north and regroups in south-western Angola.

For Monday and Tuesday, only the areas north and east of Etosha have some prospects for rain but nothing spectacular is expected. In the meantime the bias has shifted to the west as the mid-level trough from Angola starts reforming and spreading southward hugging the coastal plain below the escarpment. On these two days, surprisingly intense showers in the Kunene region are quite possible.

By Wednesday, there is a marked change in conditions over the central and eastern areas. The trough is expected to extend all the way to the Orange River and situated further west than usual which indicates a small chance of rain for the south and south-east.

This will however not include the Karas region, as the South Atlantic high is expected to make landfall during Sunday night, bring cold weather to the southern Namib and the Karas region closer to the Orange River. As the high migrates to the east, this cold is expected to come from the east and will be felt on Tuesday in the Karasburg, Aroab, Gochas and Aminuis districts.