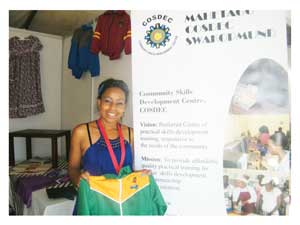 The Economist caught up with Yvonne Maletzky from Mahetago COSDEC at the second Arandis Investment Conference and Mineral, Mining and Energy Expo which took place a fortnight ago. Maletzky was eager to show The Economist some of the products produced by trainees at the development centre. (Photograph by Lorato Khobetsi)

Situated in Swakopmund, Mahetago Community Skills Development Centre (COSDEC) is a community based training centre with the main objective to provide training skills to the unemployed youth and previously disadvantaged groups that will assist them to generate an income.
According to Yvonne Maletzky from Mahetago COSDEC, the development centre falls under the Community Skills Development Foundation (COSDEF)which is a registered Trust co-ordinating, supporting and supervising the various COSDECs.
“Although COSDEF is a registered Trust, the organisation still benefits from its close ties with the Ministry of Education and is funded through the Namibia Training Authority (NTA). Currently 85% of each COSDEC’s funding comes directly from the Foundation. Special projects are funded by various donor agencies, the private sector and individual sponsorships,” she said.
According to the Community Skills Development Foundation website, each COSDEC is expected to generate 15% of their total yearly budget through own initiatives. Although the Centres may lobby for additional donor funds, the Centres are encouraged to set up “Production Units” linked to their training programs to generate own funds.
She said since Mahetago COSDEC took over the community centre which was previously owned by the Swakopmund Municipality in 2007, they have trained about 2000 youth as well as previously disadvantaged individuals.
“We have great testimonies from most of our trainees, some of them have started their own businesses, while others have found jobs in the direction of the courses they trained in. Most of them did not really end up doing what they thought they would but they got jobs and they are employed,” she said.
The Foundation has community development centres in various towns such as Swakopmund, Tsumeb, Gobabis, Rundu, Otjiwarongo, Opuwo, Ondangwa and Luderitz. The Foundation is governed by a Board of Trustees which includes six Namibians from both the public and private sectors. The Honourable Minister, Nahas Angula, is the Chairman of the Board.
She said Mahetago COSDEC currently has 296 trainees in the first intake of the year, the second intake started earlier this week.
“We need the community to support us, as well as people who are good with their hands. We are currently moving to a new location in Mondesa and we are going to introduce new courses. We want the community to come out and get the skills. We offer courses from level 1 to 4 and they are NTA accredited,” she added. 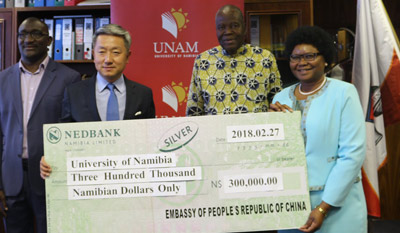 Exchange students off to Germany 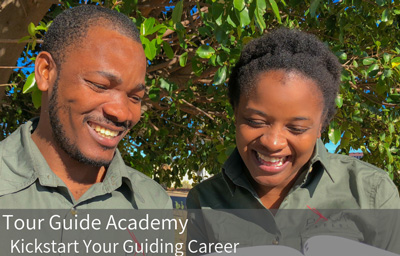 UNAM looks at micro-algae to provide combined heat and power