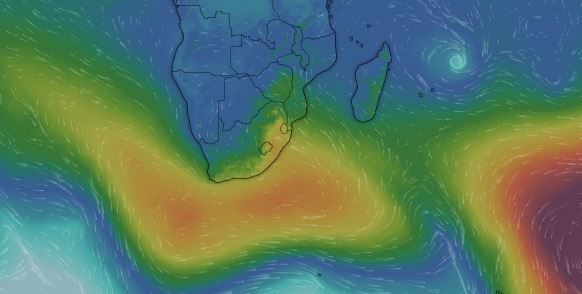 Cyclone Idai had no perceptible effect on Namibian weather other than slightly elevated humidity in the upper atmosphere between 25,000 and 35,000 feet as detected by refractory images captured specifically for these elevations.

With very little hard data on the ground, scientists have to rely on sensitive satellite equipment that measures the differences in wave lengths at specific heights. From the measured deviation, sophisticated computer algorithms then detect humidity signatures, indicating fairly accurately their height and direction of movement. This is about the only real evidence that we (in Namibia) have that a cyclone was active on the sub-continent’s eastern seaboard and coastal plain.

Local weather was characterized for the third week in a row by good cloud cover, isolated showers and very hot afternoons. On the face of it, visible conditions seem to be neutral to positive, but the actual results are disappointing.

The reason lies in the upper atmosphere where pervasive high pressure control has been present for three months running. While the surface positions of the high pressure cores are important, their effect is restricted to what can be observed directly, i.e. south-westerly wind at the coast, heat-low conditions over central Botswana, the Inter-Tropical Convergence Zone moving deeper into Angola, very hot afternoons in the Namibian interior, and a well-demarcated convergence zone running through Namibia into southern Botswana and South Africa.

Yet, none of these elements in isolation, should have such a devastating effect on precipitation indicating that one has to look for reasons at altitudes far above ground level. This is where one finds in the upper atmosphere a set of conditions all working together to cause negative rainfall prospects over Namibia. Of these variables, the most important are pressure, relative humidity, and the strength of the jet streams around 45,000 feet.

The first visual shows that the South Atlantic high was a little weaker than usual as it migrated around the southern Cape coastline, and that the southern Indian high was of normal strength but displaced to the south. The movement up the Mozambican Channel (from south to north) was significantly reduced as a result, first of Cyclone Idai, then of the cyclonic circulation that remained offshore Mozambique. This weakened the normal effect of the high, reducing the strength of the anti-cyclonic circulation over the sub-continent and consequently reducing the amount of vapour that reached Western Zambia and southern Angola.

The combined effect was another disappointing week for Namibia, confirmed by the second visual where only very thin vapour pockets and streams are visible.

The signature mid-level trough is present over Namibia during the weekend. The cloud base should recede somewhat coming down to between 12,000 and 14,000 feet. Mid-level cloud formation will again be deceptively good but the upper air anomalies are still in place so convection will remain suppressed.

Similar to the previous three weeks, this will be visible as widespread cloud formations east of the escarpment over the Namibian interior, but rainfall, if any will be brief and very isolated.

For the country as a whole, afternoon temperatures should be more bearable, and this will carry on into Monday and Tuesday.

As of Monday, the cloud base will sink further, perhaps to as low as 10,000 feet. A brief low pressure system is expected to developed around 18,000 feet elevation, fairly close to Walvis Bay but remaining offshore. This cyclonic cell will draw in air from southern Angola and Western Zambia resulting in positive rainfall conditions for the northern half of Namibia, but only for a few days.

Monday and Tuesday also see some alto level activity with much cloudiness at higher levels. The combined effect may produce surprisingly good falls over the northern half but only on these two days

By Wednesday, the trough has shifted to the east and a well-demarcated convergence zone is present running from Kunene to the south-east up to about Mata Mata. However, the upper atmosphere anomaly returns, and while there may be good cloud cover, upper level conditions will again conspire to suppress convection. 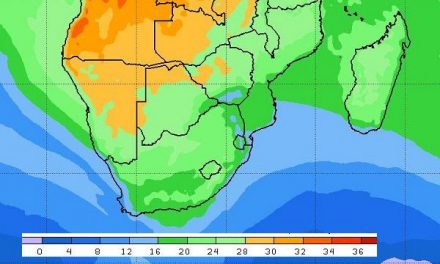