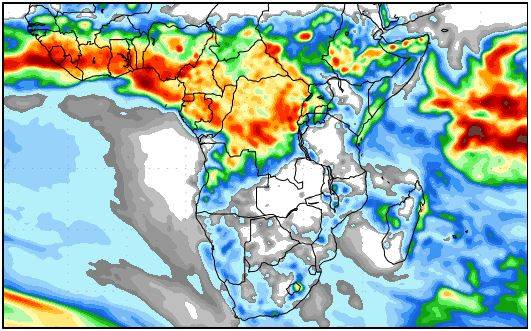 Visual: Precipitation forecast for southern Africa for the period 29 September to 07 October 2018.

Source: GrADS/COLA prepared by George Mason University based on the forecasts of the US National Centers for Environmental Prediction, www.wxmaps.org/outlooks.php

For the past eight weeks, the very respectable National Center for Environmental Prediction in the United States, has forecast some precipitation over Namibia in the second week of their 16-day outlook. This is what is shown in the visual. However, it has never happened that way and the closer the forecasts came to the actual event, the maps changed and the precipitation outlook was reduced to zero.

This has nothing to do with actual conditions. It only shows that, given current conditions, the set of algorithms that drives the forecast, are programmed to expect wetter conditions further out, i.e. 9 to 16 days ahead. The mere fact that there is such a consistent divergence between the medium outlook and actual events, indicates that current conditions (on which the forecast is based) are unusual, and that the longer-term pattern is disturbed and therefore basically unpredictable.

For the whole of this week, Namibian weather was in that typical deadlock phase when very little changes on the local scene but with huge movements in the bigger picture. From start to end of this week, the daily weather followed a regular pattern, cooling at night and hot to very hot afternoons depending on latitude and airflow.

Of course, this is set to change soon because the seasonal equinox falls on Sunday, 23 September. As of next week, the entire Namibia receives more solar energy every day than what it loses through radiation during the night. Although the sunshine hours increase by only about a minute a day, the son’s angle also shifts higher by the day helping to heat things up.

This week showed a very regular late winter early summer synoptic progression. Lower pressures were present over almost the entire sub-continent with the two major high pressure cells, the South Atlantic in the west and the southern Indian in the east, more or less where one would expect to find them.

A weak cold front passed the southern Cape but the local impact was minimal other than two slightly colder mornings with the wind coming from the east. There was no continental high present, not even in the southern end of the Mozambican Channel.

Earlier in the week, Namibia’s weather was again split into a southern half and a northern half. In the south, the winds were mostly south to south-easterly while most of the north had wind from north-west to north. Only later in the week did the wind turn predominantly north-east.

The northern / southern half split was also evident on satellite images with a well-demarcated but weak trough coming from far out to sea in the St Helena area, then cutting across Namibia from the southern part of the Kunene Region to the northern part of the Karasburg district. This trough brought some cloudiness into the interior but the cloud base was significantly elevated at around 18,000 feet. On the surface, humidity was much lower, typically less than 15%.

Another indication of the generally lower pressures on land was the prominent continental haze with many private pilots complaining of not finding the horizon. This is very typical for Namibia during September and these dust particles will in the next month turn into an important catalyst for condensation once the cloud cover increases and the cloud base comes down to around 12,000 feet.

There was some upper level ridging (above 25,000 feet) but not nearly strong enough to call it a heatwave. At the end of winter, the upper atmosphere is often controlled by high pressure conditions as a left-over of the strong high pressure cells on the surface. When this happens, the air density is slightly higher in the upper atmosphere than on the surface where the sun’s heat tend to reduce the density. The entire airmass through more than 11 kilometres sinks very slowly in the afternoon, causing diabatic compression which raises the surface temperature, sometime considerably. It is only when this happens that meteorologists refer to it as a heatwave. It did not happen this week.

The weak mid-level trough remains in situ during the weekend effectively splitting Namibia into three zones. In the south, windy conditions will prevail with a good chance of north-westerly winds. In the central zone, the airflow will be from the north-west with much cloudiness but still at a very high level. In the north, the first signs of an unstable atmosphere are visible with very hot conditions overall, interspersed with scattered clouds and a predominantly north-easterly airflow.

From Monday to Wednesday, the trough has shifted to the east amplifying the unstable air in the Kavango, Bwabwata and Zambezi. Quiet but hot conditions will prevail in the central high ground while the windiness in the south will spread to the central Namib, the Khomas Hochland and the central areas of the Hardap and Karas regions.

The South Atlantic high pressure cell, while fairly strong at 1028 mB remains out to sea with only its outer rim at 1016 mB making landfall south of the Orange River.

As of next Wednesday, there is a slight chance for rain from Drimiopsis further north, into Bushmanland, the Kavango and Bwabwata. This, however, is not supported by all forecasts.

As a result of the proximity of the South Atlantic high, Monday night and Tuesday will be cool to cold in the southern Namib and the adjacent escarpment.