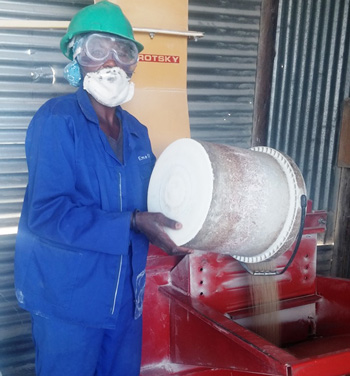 Taking action and being able to commit and persevere no matter the circumstances, is one of the most important attributes of an entrepreneur, and this is what 49 old female entrepreneur, Emelita Kuutondokwa, has grasped over the years.

Kuutondokwa the sole owner of Emelita Kuutondokwa Trading CC, a registered business specialising in the processing of a traditional pearl millet, known as mahangu, into a finished, crushed product, has taken on the demanding task of running her own business – assuming full responsibility for its execution through success and challenges.

The business is fast becoming an established brand in Oshana Region, where she has three full-time employees.

Pearl millet is the world’s most popular type of millet crop. In Namibia, it is known as mahangu and is usually made into porridge called oshifima or isima in some local languages. Mahangu can also be fermented to make a drink known as oshikundu or sikundu.

With valuable experience gained over the years, Kuutondokwa elaborated on why she chose this specific venture. “Experience is very important. After working in the industry for years, I felt that I could make it,” she said.

Born at Oshinyali village, in the Oshana Region, Kuutondokwa comes from a family of seven siblings. After she completed her secondary education at Oshakati Senior Secondary School, Kuutondokwa, could not further her education due to lack of financial support. Being the woman that she is, this did not deter her. “I had to look for a job that could allow me to pay for my sibling’s school fees and also assist my family with taking care of household expenses such as food,” she said.

In 1991 Kuutondokwa’s persistence paid off when she secured employment offered to her by the late Gabriel Kandjengo, a reputable businessman from northern Namibia. The business offered mahangu crushing services to the community. In 2011, she decided to go for it and establish her own business. Using her savings, Kuutondokwa bought her first asset, a mahangu crushing machine. As her business grew, so did the demand – she had to keep up.

In 2015, Kuutondokwa approached Bank Windhoek’s Emerging Small and Medium Enterprises (ESME) Finance Branch for working capital and financing to purchase equipment. Her application was successful and a year later, she was able to open another branch at Epungu Ekukutu Village.

Bank Windhoek’s ESME Finance Branch mandate is to ensure that promising Namibian entrepreneurs, with feasible business ideas are financially assisted in order to contribute to the country’s economic alleviation.

“One area we focus on is empowering women. Kuutondokwa’s drive and focus is what we would like to see from every woman planning to enter the Namibian business landscape. She took a local product, met the demand on the processing capability and capacity and improved on delivering it to her market. This is a successful Namibian story and we are so proud to have been able to help her realise her dream of being independent and successful. This venture has shown that together it is possible to achieve success. We wish her all the best,” said Bank Windhoek’s ESME Finance Branch Credit Manager, Aune Hamukonda.

One of the main challenges her business is facing is lack of transport for bringing mahangu from producers who grow it to the processing facilities. Despite this her business manages to generate good revenue. She also points out another challenge; foreign direct competition that usually offer the same services at lower prices. This, she says will not stop her from serving her loyal customers and she will continue to reinvent her business in order to remain competitive.

Kuutondokwa advised other entrepreneurs to work hard, save more and to never give up. “Do not wait for the government to help. With your education or skills nothing is impossible. Success comes to those who work hard to achieve their set goals,” she said.

Kuutondokwa commended Bank Windhoek for the role it played in her success and because of the strong relationship she now has with the Bank, her loyalty is cemented. 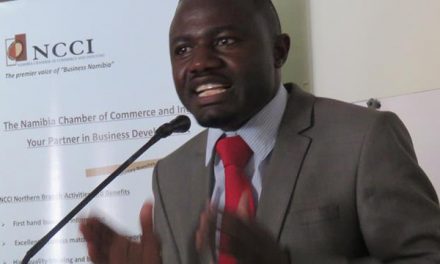 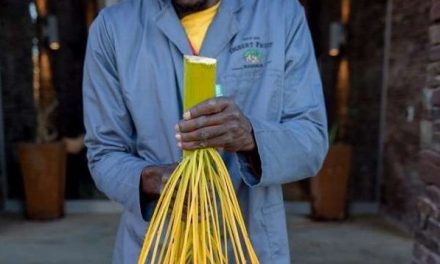