Dagbreek School for the Intellectually Impaired last month scooped the first prize in the annual 2017/18 Schools Recycling Competition initiated and hosted by the Recycle Namibia Forum.

The school bagged the prize for the third time this year with a record of 275 kg per learner, followed in second place by All Nations Christian School (111 kg), newcomer, Môreson Special School came in third (81kg), while Combretum Trust and Delta School Windhoek came in fourth and fifth respectively.

According to the Forum Coordinator, Anita Witt, besides having a record in the volumes Dagbreek managed to collect, they were also awarded the Best Improved School prize, given their increase from 222kg of recyclables per learner in 2017 to 275kg per learner during this year.

“With Dagbreek’s total volume being 30 tons, and the two runners-up each on 10 tons, our top three schools managed to collect 50 tons of the total volume of 133 tons collected from March 2017 until the end of February 2018,” Witt said.

Witt said it is interesting to note that the top three schools all have just over 100 learners which indicates that the enthusiastic input from a school principal, teachers, parents and learners can attribute tremendously towards success.

“Môreson Special School also deserves recognition for being the first school to be placed under the top three in their first year of participation,” she added.

“It is heartening to see the total volumes diverted from the landfill by our youth in 2016 and 2017 the schools collected 89 and 128 tons respectively. This year an impressive 133 tons was collected. It is also clear that the active engagement of principals and teachers play a considerable role towards successful recycling at schools,” she added.

Rent-A-Drum was again the sponsor of the 4th and 5th prizes; while B2Gold Namibia, sponsored the Best Improved School, and awarded the winner of this category with a visit to their Environment Education Centre near Otjiwarongo.

Caption: Principal of Dagbreek, Paul du Plessis (left) and Timothy Izaks from NBL shares the joyous moment at the handing over ceremony with some of the learners.

Cheetah makes it to CITES 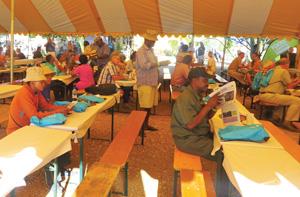