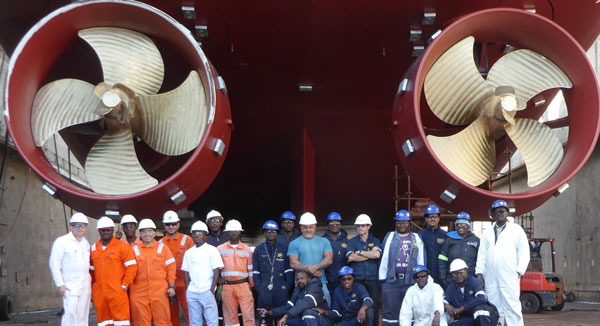 Operational conditions for the Walvis Bay drydock operator, Elgin Brown & Hamer Namibia (EBH) continued to worsen during 2017. This week the company announced another round of retrenchments following the extensive downsizing that began in August 2016.

EBH’s former Chief Executive, Hannes Uys, who has been managing the downscaling process, himself became a victim of his company’s misfortunes during 2017 when he relinquished his position and was replaced by Heritha Nankole Muyoba in an acting capacity.

Announcing the further retrenchments late on Friday afternoon, Muyoba assured all affected parties that EBH remains committed to follow due process by complying with all legislative requirements and ensuring that the restructuring is conducted with a high level of professionalism, sensitivity and fairness.

EBH staff members were initially briefed about the possibility of further restructuring on 7 December 2017. Formal notification was issued to the Office of the Labour Commissioner, the recognised Union (MMMC) and non-bargaining unit on Monday 22 January 2018. Negotiations with the union began a day later on Tuesday.

“To keep compulsory retrenchments to a minimum, early retirement and voluntary retrenchment options will be offered to all EBH Namibia employees,” the company stated.

During 2016 EBH experienced a collapse of its clientele, booking a 50% decline in dockings. This prompted the first round of restructuring. Despite several notable jobs in 2017, the ship repair company could not improve its balance sheet.

“Despite these measures, continuing economic pressures have required the company to further address its employment dispensation, in order to ensure continued viability going forward,” said Muyoba.