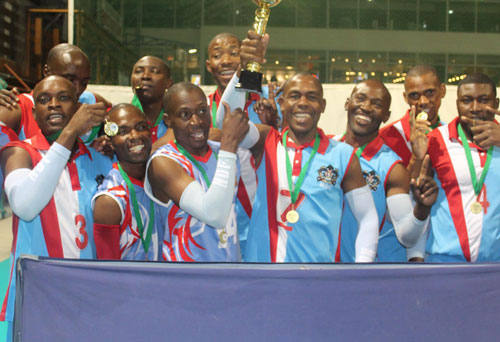 The Namibia Volleyball Federation (NVF) will host a competition which will see the participation of the best male and female teams from each of the 6 Regional Volleyball Associations in the country.

The first round of the cup will take place on Saturday 2 September at the Dome in the coastal town of Swakopmund.

The teams will battle it out to try and secure one of 6 places, per gender, in the second round of the NVF Cup 2017 that will take place at UNAM Campus, Katima Mulilo on 16 September.

“This will be a very exciting moment for the volleyball family as it will be for the first time in the NVF history to host such a big tournament in Katima Mulilo of the Zambezi region”, said Imbuwa.

Imbuwa said the NVF Cup Finals 2017 will be on 30 September in Windhoek and the venue is still to be confirmed. This will see the best 4 teams, per gender, fighting to become the Bank

Meanwhile in terms of sponsorship,Bank Windhoek contributed N$80,000 for the cup, while Erongo Med pledged a total sponsor of N$ 44,000 and N$40 000 from African Deli for the next two years events.

“The aim of the NVF Cup 2017 is to showcase our Namibian volleyball teams from all 6 regional volleyball associations,” concluded Gunter Rust, NVF President at Namibia Volleyball Federation.