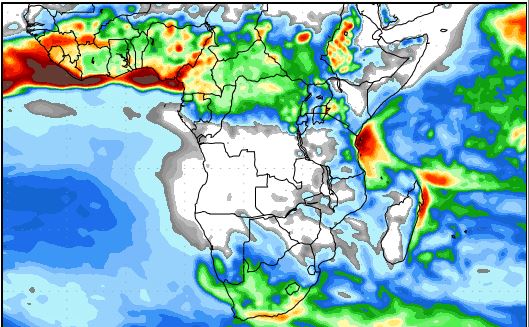 The weather map has been selected from the running series of one-week and two-week forecasts prepared daily by George Mason University in the USA. These maps are usually the most reliable longer-dated forecasts given the sophistication of the modelling on which they are based.

But a forecast offers a view of the future and in meteorology, the future changes every second. The map above was published this Tuesday 04 June, based on current conditions then. By Friday it has become obsolete as can be seen from the new updated forecasts. Nowhere is there any indication of precipitation for the week starting next week Wednesday 14 June. This is just a practical demonstration how quickly the weather changes in 24 hours and what significant effect it then has on new forecasts.

This week the weather scene was dominated by the storms hitting the Western Cape province and the southern Cape region in South Africa. These storms formed in the convergence zone between the high pressure cell over central South Africa, and the low pressure system ahead of a frontal system pushed by the South Atlantic high pressure cell.

The frontal system was so powerful, it reached into Namibia’s Sperrgebiet with some lesser events spilling into the Karas Region. For most of Namibia north of Karas, the only visible, sensory effect was the chill on Friday morning and the windy nights.

The synoptic pattern is now in a full winter stance. There is however, one observable anomaly and that is the distances between the cores of the high pressure cells in the southern hemisphere. These distances have opened up during the past month to such an extent that the high pressure migration is delayed. For instance, when the current high over South Africa departs on Sunday, it is a full six days before the next approaching South Atlantic high is expected to make landfall. Usually, this interval is in the three to four-day range, so it has roughly doubled.

The longer distances between the high pressure cores create room for substantial low pressure systems to develop. This is what happened this week in the Cape. While the highs are inclined to exert control over lateral zones, the lows in turn, have a bigger longtitudinal effect meaning north to south airflow is enhanced when a low pressure system is present, while zonal flows (east to west or west to east) are dominant when a high is extant. However, a high’s leading edge drives the frontal system where the difference between low and high pressure is at its highest. Ahead of the front, the airflow is north to south (low pressure) but behind the front, the airflow is south to north. This is the mechanism that conveys the cold antarctic air onto the continent, and brings winter cold to Namibia, first the south, then the east and eventually, the whole interior plateau.

By Friday, the low pressure system has settled, the lingering remains of the high is still visible over South Africa and the reigning airflow over Namibia is still predominantly north-east.

The high departs the continent during Saturday night. What follows then is an extended low pressure system south of Cape Agulhas.

This system is dominant for at least three days, before the next South Atlantic high appears some 500 km offshore Oranjemund.

Sunday, Monday and Tuesday sees typical winter days with very little wind over the Namibian interior. There will also not be any severe cold from the east along the Botswana border.

By Tuesday evening a low pressure system is present over the northern Namib leading to moderately strong Oosweer between Hentiesbaai and the Kunene mouth.

By Wednesday, the next approaching South Atlantic high is close to the coastline but the expectation is for only the outer rim, the 1016 mB isobar to make landfall. There is no cold front indicated for the next five days.