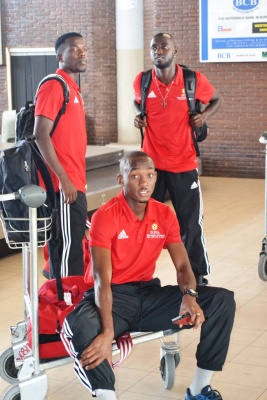 The Brave Warriors in preparation for their 2019 Africa Cup of Nations Group K assignment at Guinea Bissau set for 10 June, on Thursday jetted off to Ghana for a training camp.

The Namibia Football Association Webpage said Ricardo Mannetti said despite the team’s physical fitness levels having improved over the last couples of weeks, the much needed match fitness was lacking and thus they will be playing some games in Ghana before they visit Bissau.

“We are still lacking match fitness but so that I’m happy with the how far we have come. It has been a difficult period for all of us and going to Ghana will give us chance to play some games, for team harmony and match fitness. Remember the last time the boys played together was against Senegal last year and is a very long time,” Mannetti explained.

He added that most players in his plans has arrived barring the Platinum Stars duo of Benson Shilongo and Willem Mwedihanga, who will join the team in West Africa after their club’s CAF Confederations Cup assignment over the weekend; while Petrus Shitembi of Stellenbosch FC, competing in the promotional playoff to the Premier Soccer League, will join the team on 4 June.

“The captain, Ronald (Ketjijere) will join as next week as well as soon as he’s done with his Justice Training Centre studies. I have a squad of 24 players and in will trip that down to 18 to play in Bissau and then we come back home as some players need to play the Debmarine Namibia Cup and after that we head to South Africa for the 2017 COSAFA Castle Cup that starts on 25 June,” said Mannetti.

The Brave warriors are Group K together with Zambia, Guinea Bissau and Mozambique for the 2019 AFCON qualifiers.